The United States Ministry of Truth on Saturday released a new report confirming what nearly half of all Americans already knew: That professional democrat voters have the best and most fulfilling job in America. The study observed nearly 300 million Americans over a period of 32 months, and concluded that professional democrats have the best job in the nation by a wide margin. 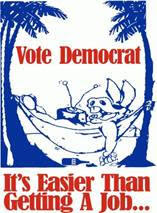 While at first the results seemed perplexing to some, that's just because they're either Republicans or Tea Baggers, and in either case are too stupid to comprehend the results of the study.
One great example to illustrate why democrat voter is overwhelmingly the best job in America is the Occupy Wall Street movement. By now, we're all familiar with the professional democrat voters who have been occupying the Manhattan thoroughfare. It's no coincidence that Wall Street makes up one of the largest and wealthiest collection of uber-rich crony capitalists who in the months and years leading up to the 2008 election funneled hundreds of millions of dollars to Pinocchiobama in an effort to buy the 2008 presidential election. The most significant impact Wall Street's money laundering machine has had on the NYSE's phony occupiers is that by doing its part to get Pinocchio in the White House, the Occupy Wall Street protesters were granted their wildest wet dream in being awarded the right to work for the next four years as professional democrat voters.
With Pinocchiobama's victory, the Occupy Wall Street protesters and slothful drug addicts across the fruited plain won the right to work as professional democrats for the next four years. They were guaranteed a full-time salary for no less than three years (a time period the President of the United States is fighting tooth-and-nail to extend). The job title is somewhat of a misnomer, as the name for it is "unemployment benefits". Obviously, the term "unemployment" was meant to be interpreted in a figurative manner.

The benefits package offered by their new employer includes free food for the duration of their employment. They were issued company credit cards called SNAP, which is an acronym for Supplemental Nutrition Assistance Program. The credit cards can only be used for food and groceries, which has led to some controversy among professional democrats who are disgruntled over the fact that their company credit cards cannot be used to purchase illegal drugs. 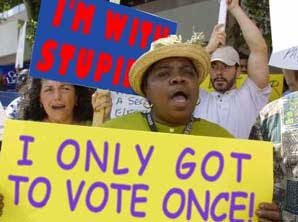 The job comes with a number of benefits, including completely free healthcare and company-issued housing, which for some comes at a drastically-reduced rate well below market value, and for others is completely free-of-charge. (References: Section 8, Public Housing, Fannie May, Freddie Mac).
Professional democrats and their children also get free education from pre-kindergarten all the way through college. 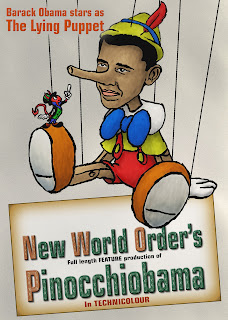